There has been a slowdown in all the major components: agriculture (2.7%), manufacturing (6.1%) and services (9.6%). The deceleration, however, has been much more modest than what was envisaged by the Street. The growth in 1HFY09 at 7.8%.

In line with liquidity and credit problems faced in recent months, we expect GDP growth to slow in 3QFY09 to around 7.2%. The trend is likely to reverse in 4QFY09 and projected to be 7.8% in FY09. The performance of agriculture, mining, electricity and personal and social services are likely to improve in 2HFY09, while manufacturing, construction and trade, hotel, transport and communication are likely to witness deceleration. 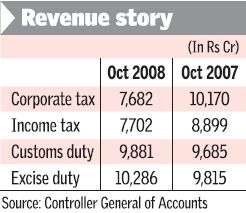 During the Euphoria on Dalal Street early this year, me too for a BIG IPO / Follow on Public Offering, Rights Issue, AIM Listing was the mantra in corporate boardrooms. Digging into our database we have found several companies have SEBI approval for big fund raising. here is the except, END_OF_DOCUMENT_TOKEN_TO_BE_REPLACED

The software subsidiary Siemens Information Systems Ltd – SISL, which had an extraordinary loss and increase in tax liability has impacted the results of Siemens India. The management clearly indicated that Energy, Industry and Healthcare are the focus areas for Siemens India Ltd. Siemens management further indicated that the worst of the project-related losses are behind us so far as Torrent Power project is concerned. END_OF_DOCUMENT_TOKEN_TO_BE_REPLACED

As the saying on the street goes, Teji Mein Teji, and Indian corporates got caught in the same whirlwind only to realize they have to go in for a restructuring now.

Most Corporates have built its businesses for 8-9% growth. Growth is likely to slow down to 5-6% over the next couple of years, and this will mean that profits will likely decline. If corporate India wants to avoid a significant fall in ROE, then a major restructuring cycle must get underway.

And the difference between lat 90s and now is that the former one was earnings burst was driven by high financial gearing. The coming earnings decline will be caused mainly by operational gearing. Cost structures that were built for high GDP growth will have to shrink.

The sectors that seem to be at the biggest risk of earnings decline purely on the basis of negative operating leverage include Materials, Industrials, and Utilities. These companies can undertake some mico restructuring exercises like – reduce costs – mainly relating to employees, rent, and non-operations; rationalize capacity; change product mix to reflect a possible down trading in customer spending patterns; lower exposure to asset markets, especially real estate and equity; reduce cash balances to pay down debt.

The companies with the maximum operating leverage and high financial leverage include a bunch of Consumer Discretionary, Industrials, and Real Estate companies.

Post Sept-08, the bottom up earnings growth expectations of SENSEX companies has fallen sharply to 2.9% in FY10 [originally 12.2%]. Earnings growth is falling but primarily in FY10E, with apparent resilience in 2HY09E. The key earnings swing is Tata Steel, where Citi is well below consensus estimates on the street.
For FY10E, there were 12 downgrades to every upgrade, post the September quarter.

The big earnings cuts are in the metals/commodity spaces, while earnings growth remains concentrated in energy businesses (55%+ of Sensex). There will be beneficiaries of lower commodity prices and interest rates; but given demand, pricing and asset quality overhang, analysts appear fair in not factoring them.