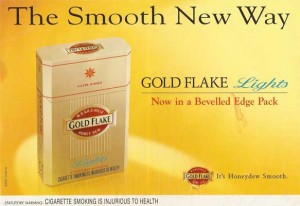 Unlike the previous Corrupt Regime of Congress, the present BJP Govt is highly determined on preserving the Health of the Nation and took another bold with hawkish stance on cigarettes which saw another double digit excise hike.

The budget has raised excise duty on cigarettes by 12-22% implying a ~14% effective hike for ITC, ahead of our as well as consensus’ estimates. This is fourth consecutive double digit hike and in fact, comes on top of ~20% hike in Jul-14. The budget also included tobacco taxes under ‘Public Health’ which seems to be a departure from the government’s earlier objective of revenue maximisation, in our view

After 72% hike in Jul-14, hikes inmicros were at 25% and the duty gap with RSFT (69mm) is now Re0.45/stick. While micros were introduced in 2012, ITC gradually expanded these to minimise cannibalisation with RSFT. ITC’s priority would now shift to protect volumes and focus would rise on micros which are ~13% of volumes. In this context, it is useful to note that ITC reported a 14% YoY decline in volumes in 3QFY15

The budget also raises concern on other tobacco regulations which impacts legitimate industry (unlike bidis etc.). Cigarette packs will carry pictorial warnings covering 85% of the area from 1-Apr-15. In addition, the government is considering: a) ban on sale of loose cigarettes (>70% of the market is in sticks); b) increase in age limit from 18 to 25 years; c) higher penalty for smoking in public places etc. The proposals were placed for public opinion but there is lack of clarity on implementation timeline.

In this backdrop, we feel that ITC Cigarette Business has more hurdles to face and marks an end of an Era as bellwether in the NIFTY & SENSEX companies.