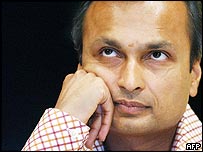 Anil Ambani who is in a hurry to takeover as the richest Indian from his brother, Mukesh has landed in trouble for violating SEBI guidelines in the Reliance Power IPO draft prospectus.

Reliance Power is promoted 50:50 by Reliance Energy and Anil Ambani and investment companies owned by him. Reliance Power has proposed to come out with an IPO of 130 crore shares of face value of Rs 2 at a premium to be fixed later. This includes 16 crore shares to the promoters at the offer price. The net offer to the public will be 10.5 per cent of the company’s expanded equity capital raising Rs 12,500 crore.

However, according to page 29 of the draft prospectus, it has been pointed out that Anil Ambani through AAA project ventures and REL got themselves allotted 105 crore shares each on September 30 reportedly through a bogus merger. Each of them plan to subscribe 8 crore shares each at the IPO price.

Clause 4.6.1 has been provided to check the abuse by promoters by allotting shares to themselves, for consideration other than cash by merger schemes; allotment of bonus shares out of revaluation reserves (ie out of reserves not earned in cash) and or in any other manner other than for cash (for example contributing an asset to the business at higher unfair value), within three years prior to public issue.

The only exception is when a merger scheme is sanctioned by a High Court. This clause has been provided to take care of genuine mergers and acquisitions which may have taken place before the public issues.

Reliance Public utility – Anil Ambani’s Shell Company Scam:
The group had an existing shell company called Reliance Public Utility Private Limited (RPUPL) which at that time had a paid up capital of Rs 1 lakh. The authorized capital of RPUPL was increased to Rs 1000 crores by a resolution dated July 30, 2007.

RPUPL has put in considerable efforts in acquiring necessary technical and manpower skills which are ancillary to the business of Reliance Power Limited which can take benefits of this specialized skill sets and technology available with RPUPL to undertake mega power projects and implement them more efficiently and successfully.

From where the shell company having only one lakh paid up capital till July 31 this year acquired skill sets to implement mega power projects.

Anil Ambani is afraid to risk his own money and thus is passing on the risk of Ultra Mega Power projects to the Indian investor. Is there any agency in India to probe this scam ?