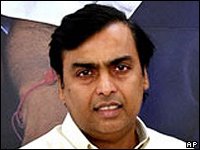 If 2008 was a year of disaster for World Economy, 2009 doesn’t seem to be much better either for Mukesh Ambani. It is widely reported in the press that he has lost close to $5 bn in Oil Hedging. However, our sources said that it is likely to be less than $1 bn but still a significant amount to be paid by the shareholders of Reliance Industries Ltd.

There have also been other setbacks. Reports emanating from Dubai indicate that Mukesh Ambani has also incurred major losses in crude oil hedging, perhaps to the tune of $5 to 7 billion. TWO TOP RIL officials, Harish Shah and Alok Aggarwal, have already put in their papers. In Delhi, Shankar Adawal, once a top RIL troubleshooter, has been totally sidelined and is flustered with calls from estranged employees.

Anand Jain, a close confidant of Mukesh has been named in the report over the oil hedging losses.

Mukesh Ambani is far smarter than M. Raju of Satyam to cover the issue even if RIL has lost your money 🙂