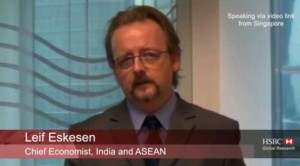 The government of India has pushed through numerous reform measures over the past nine months. However, Policy implementation and announcements have tapered off recently and could slow even further. For example, have a look at the Failure of the FDI Policy in Indian Multi Brand Retail

HSBC cut India’s growth forecast for FY2014 to 5.5% (vs 6.0%) and FY2015 to 6.6% (vs 7.1%). They expect further progress on reforms, it will only materialize slowly. Moreover, the global recovery is likely to come later. The recovery in India will, therefore, prove even more protracted.

Deficits The twin deficits have narrowed slightly. The fiscal deficit came in below 5% of GDP last fiscal year and the trade balance has improved. However, the fiscal deficit is not likely to narrow further in FY2014. HSBC expects expect both revenue and expenditure slippage and Current Account Deficit due to Large Gold and Oil imports remain elevated and a concern for the Indian Economy.

The composite PMI reading for the manufacturing and services sectors averaged 51.3 in April-May, down from 53.4 in January-March. This was primarily driven by a slowdown in new order flows, domestic and foreign.

Indian Inflation Inflation dynamics are explained by both push and pull factors. In addition to the amount of rain, changes in global commodity prices are an important push factor. On the demand side, cyclically strong domestic demand lifted inflation in 2009-11. HSBC expects both domestic and external demand to gradually turn, which would lift both WPI and CPI inflation. India is, therefore, not quite out of the woods when it comes to inflation.