A total of 27 companies which were listed during the period have been examined. During this period ~INR 24832 crores has been raised from the primary market. Taking over-subscription into consideration around ~INR 1, 54,449 has been applied for these IPO’s.

Few IPOs which were over-subscribed more than 50x (overall and HNI) are Persistent Systems, DQ-Entertainment, Man Infra and Jubilant Foods. In terms of capital investment Persistent, IL&FS and SKS Micro Finance have received above ~INR 15000 crores each.

Inference:
It is observed that the IPO’s which have been subscribed the most gives better returns like Persistent, Jubilant and DQ. Moreover, we have used another indicator where we have analyzed the traded volumes as a percentage of free float on the listing day. However shares which have been traded the most have not necessarily shown good results.

The following chart shows the Performance of Stock Prices of Various IPOs – Jubiliant Foods the holding company of Dominos Pizza is the best performer while Tarapur Transformer is the Worst. 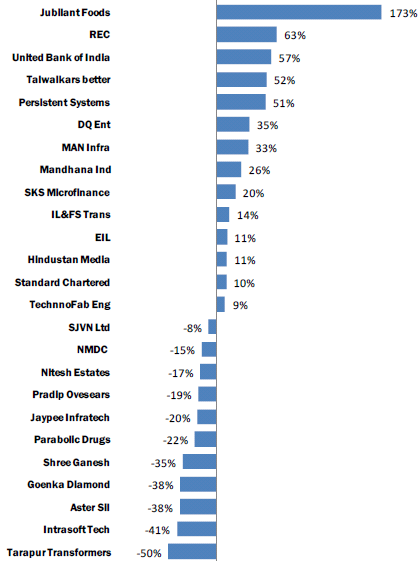