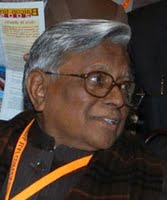 The photo on your left is that of a less media savvy Dare Devil promoter of JP Associates – Founder and Chairman – Jaiprakash Gaur. Before you read into the research of JP Hydro and Associates, we recommend you to read the confidence Gaur family had in their company and projects they were executing as they pumped in INR 2,000 Cr into the company at a share value of whopping Rs 397 / share when the market Price was mere Rs 80. All other corporate big names like Kumar Birla canceled preferential allotment in 2008 as the stock price at taken a beating.

JP Hydro
JP group has decided to consolidate its power assets under JHPL with the merger of its 80.6% power subsidiary (JPVL – unlisted) into its 63.3% subsidiary JP Hydro (listed) in a ratio of 1:3.

JP Associates:
JP group has emerged as #1 developer in NOIDA region of NCR market, in our view, led by a) low cost landbank (Rs65/sq. ft.) being part of expressway projects, b) rational mid-market pricing (~Rs3K/sq. ft), but with aspirational faciliti es such as “chip-and-putt” golf course & c) development of community at “Wish Town”.

Talks with sub-contractors indicate that JPA aims to complete the first 15kms of the Expressway by Jan-10. This should re-rate the value of its parcel #2 of Yamuna Expressway (not yet in our SOTP) & 650 Ha of landbank of its subs. executing F1 circuit. JP Infratech has spent Rs50bn of Rs97bn capex till 2QFY10. Expect Yamuna expressway with all its structures should open in 2011.

BUY the stock on correction.