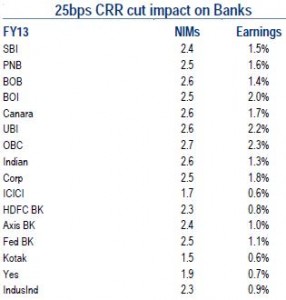 2 days ago the RBI cut the CRR by 25bps leaving the policy rates (repo / reverse repo) unchanged at 8.0/7.0%, respectively. The Chart on your Left shows 25bps CRR cut impact on Banks.

Most banks have already cut rates across products by +25-75bps (home, auto, SME), while leaving key “Base Rates” unchanged. Analysts expect banks to continue to cut lending and deposit rates in the coming quarters, as loan growth moderates. Given Indian Bank’s ALM position, we reckon margins will come under pressure for banks in the 2HFY13 / FY14, especially for govt. banks. We believe the CRR cut would provide some more room for banks to cut rates even more.

Overall, growth is still weak and requires more policy action to help stimulate the same. On the positive side the rate cut signals appear much more encouraging and if sustained could help in providing the inflexion point, especially if credit cycle begins to stabilize.

In the Short to Medium term, our preference would still be with the private banks while for the Long Term, PSU Banks top the chart of favorites as recommended here.

We are buying PSU Banks which are 5x times cheaper to HDFC Bank. Bank of Baroda & Allahabad Bank are our picks for long term.