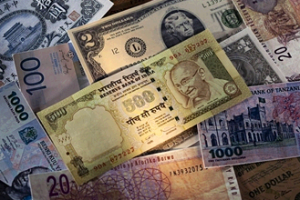 The Stagflation [Stagnancy of Reforms since Scams Broke Out + Inflation] prevalent in India, accelerated by Populist measures such as Free Food Security Bill for Votes [Costing the Nation Rs 125,000 Crore every Year] has put additional pressure on the Indian Rupee as it hit an all time low of Rs 61.53 against USD since independence in 1947. Indian Central Bankers, RBI is busy as it is caught between the Devil and the Deep Blue Sea and here is an excerpt of their strategies to protect Indians from the vested politics of Central Government.

Limited FX intervention RBI will intervene only to provide liquidity to FOREX markets and not to influence its direction. The central bank thinks the incremental hedging ratio is rising, but it is still only of the order of 50%.

Issuing quasi-sovereign bonds – an issue of non-resident Indian (NRI) bonds is on the table, but not highly likely in the current environment. The issue size could be $10bn-$15bn and could have tax-breaks for non-residents.

Inflationary Impact The RBI would not be keen on being seen as defending or preferring a certain level of the exchange rate. This is why it let the USD/INR trade above 60. The RBI could allow further depreciation if there were pressures. The RBI calculates the pass-through from INR depreciation to inflation is that every 10% depreciation leads to about a 1% increase in headline WPI.

RBI Seeks Help from Japan RBI has a swap facility with the Bank of Japan for US$15bn. This would need a potential IMF program according to the agreement, but $3bn can be used without a program. The RBI would also try to enter into an agreement with the Fed for a swap line.

Can use gold reserves as a lever – currently the RBI has about $23bn in gold reserves. It can pledge the gold to a central bank and get a line of credit. That line of credit could then be used as collateral for another loan of an equivalent amount.

The RBI is also going through a transition period. The current Governor is likely to present his last policy on July 30, and leave on September 4. The next Governor will have a tough task on hand amidst this backdrop totally responsible for the failed reforms of Congress led Under Performing Alliance.