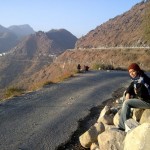 The Rampant Corruption Wave that rocked the Weakest Government of Free India brought the award of Road Contracts to stand still as former Minister Kamal Nath did nothing to stop the Hooligans. Dr. Singh, took some step and brought in Dr. C P Joshi as the Minister of Surface Transport to check Corruption. Mr. Joshi took a step to introduce point based qualification so that Large Infrastructure Companies with Fantastic Track Record like Punj LLoyd, IL&FS Transportation Network etc don’t get dis-qualified by Corrupt Bureaucrats.

NHAI has informed us that it is gearing up to step-up award activity from April onwards with about 11,000 km (worth US$13.5 bn) of projects targeted for award by April 2012. Simultaneously, we believe the process of having annual qualification limits (instead of individual project-wise) is a step in the right direction and could help cut down project award timelines by up to 3 months.

We like two stocks in this space – ITNL & IRB Infra.
ITNL – Order book of 10,500 km under construction and development along with 4,300 km of operational roads to drive 56% revenue CAGR over FY10-FY13E. SOTP Parts Valuation is pgged at Rs 270

In the Long term, we continue to view strong vehicle volume growth and current low toll rates in India as tailwinds for the sector.