Your eyes must be Red and BP shooting high the moment you read, FIIs are fleeing India. Chill, to save their siblings in the US [American Subsidiaries], they booked huge profits and thus their holding in BSE-500 has dropped from 20% to 17.8% at the end of March-08. Promoter share of the BSE500 picked up ~2.9%, rising to 58.2% in the quarter – the highest level in 32 quarters, suggesting continued promoter confidence even in a weakening market.

FIIs have been the top sellers in the correction, bucking the trend of rising foreign ownership leading to market performance. From a sector perspective, domestic institutions were strong sellers of Financials in the quarter, moving from an overweight to an underweight. Consider Citigroup one of the largest FIIs in India, is overweight on Financials, Telecoms, IT Services and Pharma. We are neutral on Energy, Consumer and Industrials, and negative on Materials and Utilities.

FII Portfolio in India March-2008:
FIIs are overweight on Financials, Industrials and Energy stocks. They subscribed to SBIs Rights issue. 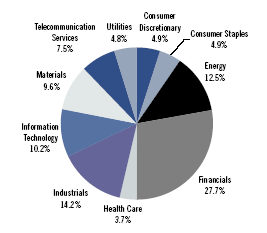 Domestic Mutual Fund Portfolio in India March-2008:
Domestic Fund Managers held a contrary view against FIIs and increased their exposure to Industrials / Manufacturing. Domestic Funds hold half of FIIs in Telecom while they both hold equivalent in Energy. Again in FMCG, FIIs and Domestic Funds take divergent views. 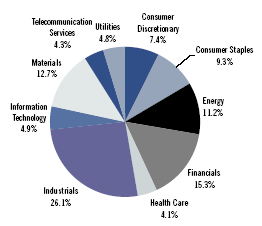 Retailers Sold, FIIs Bought:
Since 2001, the retail investor has been selling and FIIs have been BUYING in India. They have ramped up their holdings in BSE-500 companies from 12% to 19.86% by Dec-07, and then started booking profits to save their family in the US and hence saw holdings decline to 17.84% 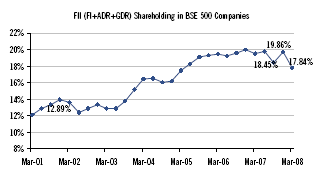 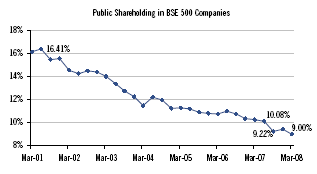 Analyst View: Continue to BUY like an SIP investor in Mutual Fund. However, if you want to beat the benchmark like we do, you have to reshuffle and churn your portfolio very often which we don’t like either, but are helpless like any other fund manager to make money in this market.