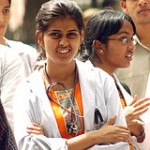 Indian hospital stocks have outperformed the market in the past six months (up 60% vs. 17% for Sensex) on the back of newsflow on acquisitions and a better-than-expected earnings profile for the sector. The long-term growth story still looks attractive, with demand outstripping supply however, in the near term valuations have overtaken fundamentals. Lets look into Apollo Hospitals and Fortis Helathcare stocks for Long Term Investment.

Apollo Hospitals:
Apart from the current 2,120 beds being added, Apollo has no immediate plans for fresh projects. We believe that with most of its hospitals mature, revenue growth will be steady going forward accompanied by stable improvement in margins. As such, expect 15% revenue CAGR over FY10E-FY13E.

Apollo Pharmacy – With more than 1,000+ outlets up and running, we believe that Apollo will now look to focus on making the business profitable as it enters a steady state. With both its businesses entering into steady state, we believe Apollo will shift its focus to improving operational efficiencies.

Apollo is expected to report an EPS of rs 28 and Rs 32 for fy 11 and fy 12 respectively. Apollo is trading at 27X on FY11 P/E, compared with its 7-year historical average of 26X. We believe the stock is fully valued despite strong fundamentals. BUY the Stock on correction.

Fortis Healthcare:
With the acquisition of 10 hospitals from Wockhardt last year, we believe Fortis will be able to post strong 32% revenue CAGR over FY10EFY13E. We estimate successful integration of previous acquisitions will prove to be margin and EPS accretive.

The acquisition of 23.9% stake in Parkway Holdings (PWAY.SI) will stretch Fortis’ balance sheet and will prove to be EPS dilutive for the next two years. As such, we believe that while synergies may exist, the cost of acquisition offsets the income flowing in the form of associate income and will dilute EPS until FY2012E.

Analysts expect 54% EPS CAGR for FY10E-FY13E for Fortis, incorporating the Parkway transaction as an associate investment. Fortis is expected to report an EPS of Rs 4 and Rs 6 for fy 11 and fy 12 respectively.

Apollo Hospitals Vs Fortis Healthcare Valuations: The high revenue growth of Fortis does not justify such a high multiple which is at 56% premium to market leader – Apollo. A Multiple of 30x forward earnings for Fortis is what the street is expecting which will set its corresponding target prices at Rs 120 and Rs 180 on fy 11 and fy 12 earnings. BUY on Correction.

Both the BUY calls are for Long Term only and that too enter on correction.