India continues to trade at a premium to the region, but given its stronger growth expectations under Narendra Modi (#NamoBullRun), it seems well placed on a PEG basis vs. peers. Most market indicators also indicate valuations FAIRLY PRICED with NIFTY quoting at 7,900. With a firm government in place, we think the implementation of reforms could jumpstart earnings in coming years.

Which Sectors of NIFTY Have Reached Peak Valuation ?
Out analyst has beautifully constructed a Model of Evaluating NIFTY stocks based on their previous PEAK Multiple (it could be P/E or P/BV or EV/EBITDA). Markets may have run up sharply, but from a pure valuation perspective, more than a quarter of the Nifty stocks are trading below their long-term (10-yr) average valuations. Sectors that are outright expensive are consumer staples and cement. Industrials and consumer discretionary stocks are trading at or just above their long term average levels but as history shows, can trade far higher in a structural upcycle while some sectors such as IT services, healthcare, financials and utilities still have stocks that are trading below their long-term averages.

So What Indian Retail Investors Can Do Now ?
Go through the NIFTY Peak Valuation Model. If you are already holding stocks that have peaked, just continue to HOLD or TRADE in half of the quantity so as to bring the price of your average holding down.

What to BUY & How ? 25% of NIFTY Stocks quoting Low doesn’t mean they are cheap. They come with hidden baggage, for example PSU Banks like PNB has lot of NPAs on the Balance sheet. If you want to BUY, look for Sectors that can achieve good growth and then Zero in on the stock which you want to BUY. Look for its historical Peak Valuation and then decide. It is best to BUY Mutual Funds Suggested by us or basket of stocks such as NIFTY JUNIORBEES.

What is the Sure Shot Way to Tell Market Valuations have Peaked ?
If the Forward P/E of the NIFTY as a whole is breaches 21 as shown below, then it is time to Book at least 25% Profits, 50% suggested as on two previous occasions Indian Equity Markets have significantly corrected from the peak. 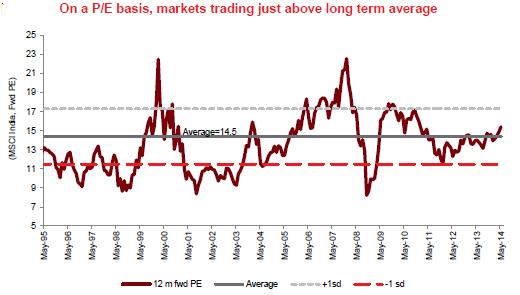 In 2000 and 2008 when INDEX went through the and was quoting at absurdly high P/E of 21, it corrected significantly. Also remember the Market Cap to GDP had touched 1.2 in 2008. Sure signs of Market being over-heated & a Correction ahead.

Current Forward P/E India’s Current Forward P/E for FY 2015 is 16.5 and FY 2016 is 14.4 So in our opinion considering the Bull Phase the market is into, there could be some more steam left in the current rally. However, use only corrections to enter the market or be prepared to hold for 10+ years like we do and are relishing the Tax Free Returns of 21%+.