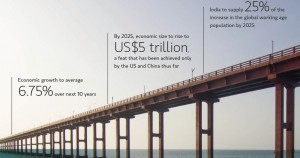 After a productive boom period during 2003-2007 with high growth and moderate inflation, India has been facing a stagflation type environment since 2008 with the Corrupt Congress Government at the helm of affairs, and a persistent slowdown in growth alongside high inflation. The agenda driven politicians in Congress caused (a) a sharp increase in rural wages, (b) a high fiscal deficit, (c) a decline in private investment, and (d) weaker external demand.

Worst Is Behind UsWith the progressive BJP Government all set to be installed within the next few days, expect the Structural Growth Story to Take Charge which was started by then PM of India Shri Atal Bihari Vajpayee. The two key variables that will be critical in reviving India’s growth trend are: (a) improvement in the external environment and (b) a pickup in the pace of structural reforms.

The Journey to $5 Trillion Economy
We expect a steady pace of implementation of policy reforms, which will lay the foundations for India’s real
GDP growth to move higher to an average of 6.75% over the next 10 years. If our projections were to come to fruition, India’s economy would pass the US$5 trillion dollar mark, a feat that has been achieved by only the US and China thus far and would make India the fifth-largest economy (from 10th currently) in the world.

Why You Should Own Equities ?
The macro story leading to the next profit boom – we expect profit growth to average 14.6% over the coming decade; 2) the drivers for the rising household ownership of equities, given that equities could compound between 12% and 15% over the coming decade in local currency terms; and, ultimately, 3) India will remain a portfolio manager’s delight because of its intense stock-picking characteristics

Where will BSE SENSEX be at End of 2025 ?
Conservatively, assuming the market cap to GDP will be 75% in ten years from now a 12% annual return takes the
BSE Sensex to 70717 by 2024. However, investors must note that Equity Mutual Funds recommended by us beat the SENSEX returns by as much as 500 bps. Thus you could expect at least 18% Compounded returns over the next 10 years.