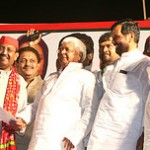 So much I hate to read and analyze the dirty Politics of our country, yet I am forced to as Foreign Investors the big movers and shakers of our market are keenly watching the Political scenario and the equation is getting worse by the day.

When people voted the UPA back to power, they had the “low-cost, high growth” economic engine to their credit. Arrogance just flows in the blood of our UPA Government which has performed pathetically in its second term.  Apart from series of Corruption Scandals and Highest ever Inflation  their performance in pushing the Economic reforms is miserable – 85 bills are pending and 35 have lapsed. Congress led UPA could have cut the plethora of exemptions to streamline the Direct Tax Code, pushed critical legislation on natural resources and planned a phased shift in the subsidy regime to users.

The Congress has already paid for trying to juice the revenues delivered by high growth to fund political profligacy as Voters in Uttar Pradesh, Punjab and Uttarkhand gave a thumbs down to its stupid MNREGA, Food Security Bill, etc as Indians want to Progress and move up the value chain.

Long Term Investors We have a Reason to be Worried:
Of the 690 seats across the five states the Congress won barely 157 seats and if there was any consolation it was that the BJP won fewer -111– seats. Assume that it was a house of 690, the Congress and the BJP together couldn’t have reached the halfway mark with their score of 268, forget any one reaching heir alone. So are we inviting a Third Front in 2014 Elections or will the Regional Players Together Pull Down the UPA Government for a Mid-Term Election ?

The situation reminds me of the horror stories of 1996, the BJP had 161 seats in the LokSabha and the Congress had 140 seats. After a 13-day stint the BJP government resigned leading a 13-party coalition of 171 MPs climbed and forced the Congress to support it. The first sign of this reality will be visible during the Presidential polls in July where the regional fronts are expected to force a consensus non-BJP, non-Congress candidate on the two national parties.

For the markets, the khichdi government is a very Bad idea. Even if they were to move sideways with the support of the earnings growth, the excitement of higher valuation and fund flows can be safely put to rest in the scenario of third front Politicians ruling us. So those who are Aggressively invested in Equities[90% or higher of your Net-worth i.e Sum of All Assets] for the Long Term, you can safely book profits to diversify investments and wait and watch on the sidelines.